Duke’s story – tied up and left to die

In the time since Diane and Tony Rowles founded the Rudozem Street Dog Rescue in 2008, they have become known in their area for the work that they.  Often they will rescue abused or abandoned cats and dogs that they see running about in the street, but all too often local people dump animals outside the Shelter to be looked after.  Unfortunately, some do not make it that far.

One day last month, a lady from a village near Rudozem called Alie asked if Diane and Tony could help an abandoned dog in danger.  Tony tells the story:

“Alie explained that the dog had been tied up under a trailer for ten days, only surviving on the bread and water given to it by people passing by.  She said that the people who dumped him there claimed he had a disease which could be passed to humans.  Call it what you want, stupidity or ignorance – why on earth would you chain a dog up just to let it die?

Despite having no space at the Shelter and our house being full of cats and dogs, we simply could not leave this poor dog to die.

When we arrived, the poor little guy was covered in flies, but within a minute or two, he was responding to me, licking my hand as I went to stroke him and he was soon wagging his tail.  (Click here for a video of Duke’s rescue.)

Back at the house, we gave him his own crate.  Because of the lack of space, we had to put him with another rescue dog Dotje and some of the cats.  We didn’t know how he would get on with them and wanted him to feel safe while he got used to his new surroundings.  (Click here for a video of Duke arriving at our house and having cuddles from Diane.)

Once we had a chance to look at him, we could see that he was a young boy, probably only about 10 months old.

The little lad had very misshapen legs which might have been a congenital problem, the result of malnutrition, or a mixture of both.  When we rescued Khaleesi, her front legs looked quite deformed.  With proper nutrition and support from bandages, her legs were straight again within a week or so.  This little guy’s case looked more severe, but we were determined to do what we could for him.

Another day and more emails, messages, phone calls and people turning up at the shelter asking us to take dogs. Every time we have to say we can’t help because we have no room, it breaks our hearts. Every pen, every room at the shelter and house is full of dogs and cats. Sometimes it is just too much for us to say NO, sorry we cannot help. But today was different…

As with many of our rescues, we asked for a supporter to donate 20 euros to name the dog or cat.  We are extremely grateful to Jane Hughes Elton for naming this little guy Duke.

The next day, we spent a lot of time getting to know Duke and helping him to feel safe and secure in his new home.  He enjoyed wandering about the garden and showed us just how much he craves love and attention.

It was important that he should be able to relax because the day after we were planning to take him for a check-up at the vets in Plovdiv which is a 3-hour drive from the Shelter.  Duke would need to be used to his crate as he would spend the journey in it each way in the car.

We were up very early to take Duke for a full check-up at ProVet.  We were keen to know what could be done to help his legs and to make sure that he was otherwise in good health.  The vets, who always take such great care of our cats and dogs, ran blood tests and took X-rays. 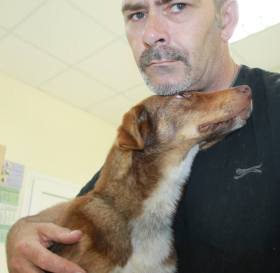 After his x rays, Duke just wanted a cuddle and to be reassured. He kept pushing up to be close.

The distressing news was that the X-rays of Duke’s legs did not show signs of a congenital problem or malnutrition.  It seemed that his legs, and in particular his feet, had been deliberately smashed – bones and ligaments have all been broken.  The vet said if the damage had been the result of an accident, or Duke had been run over, there would be evidence of cuts.  It looked as though the damage had been done deliberately as if he had been stamped on or hit with something.


Despite all the sad cases that we see, we are still deeply affected by the story of all of our rescues, but for some reason, we were particularly upset by this news: that someone had decided to inflict such injuries on a defenceless dog is beyond our ability to comprehend.

We are often asked whether the person/people who abused Duke have been prosecuted and brought to justice. The sad fact is that we don’t know who hurt Duke and most likely we never will. So we focus on what we can do to help the many, many other street dogs and cats who need our help like Duke.

Duke also had a cough which the vets said was not an infection, but due to damage to his throat from the chain used to attach him to the trailer where we found him.  Other tests showed that Duke was also very malnourished.

Now we had to give Duke the best chance of recovering from his injuries so the vet suggested putting splints on his legs for the two weeks to see what effect they would have on the deformity.  Because there is so much damage to Duke’s bones and ligaments, the vet wanted to try this first before deciding what operations to do.  They are hoping that there will be some improvement before the surgery because some of the deformity has been caused by Duke being forced to walk with his legs in an unusual position in order to get around with broken feet.  They hoped that the ligaments and tendons might be manipulated back into position with the splints, but we would have to wait and see.

Duke was so brave.

Having the supports made to fit.

One down, one to go

Duke feeling sorry for himself. It was such a long day for him.

Duke did really well. After a few minutes he was walking about.

And all through the tests, examinations and dressing of his legs, little Duke was as good as gold, waiting patiently for it all to be over.

When we arrived back after a long day, Duke was happy to be home, wagging his tail and, over the next few days, he began eating well and learning how to get about with his splints and we gave him lots of love and cuddles to help him on his road to recovery.

We set off once again for Plovdiv – the vets wanted to check Duke’s feet again and do some more tests.  On taking off his bandages, they were very pleased with Duke’s progress, but despite this, Duke would still need a series of operations to help him to walk properly again.

The vets check Duke’s ears – the infection has gone.

What a difference to his left leg in two weeks.

Duke has a new bandage applied

With the second leg finished, Duke has a blood test.

The following week, we returned to ProVet for a further check.  From our first visit and the initial X-rays, the vets had been consulting with specialists in both Bulgaria and Italy over Duke’s legs.  They were agreed that any operations should be held off for a few months because Duke was still growing.  He would still have supports and go for regular checks until they decided it was the right time to operate. 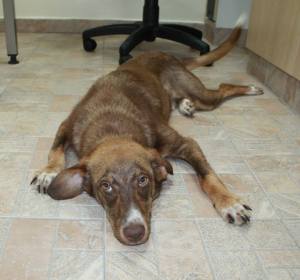 Earlier this week, Duke returned to ProVets for another check-up, before which he chewed his bandages off!   After discussions with other specialists, the vets checked the movement in Duke’s shoulder because they were concerned it was not normal and that this could cause further problems when he was older.   As a result, they decided they would do surgery the next day in an effort to correct the problem or at least make movement in his shoulder more natural.  I left him at the vets, confident that he would be taken good care of, but worried about how he would cope with being left there.

Duke and Wilma return home after a long day, both tired but happy to be back.

When I went back the next day, Duke was doing really well, already up and about treading on the flowers in the bed outside the vet’s office!  What an amazing little guy he truly is.  He had made lots of new friends among some trainee vets who had been taking photos with him. They all knew his story and could not believe what a happy boy he was after all he had been through.  Once again, we could not fault the care and love that the ProVet team show our dogs and cats.

Now we will wait for Duke to grow a bit more and keep him happy and well cared for until the next stage in his treatment.

The cost of caring for Duke, and for his operation and ongoing vet checks is considerable.  If you can help him by making a donation, please visit the donation page of our website.  We and Duke are incredibly grateful for your support.

Read here how Duke recovered and found his happy ending with a forever home in England.

Help us to feed the street animals 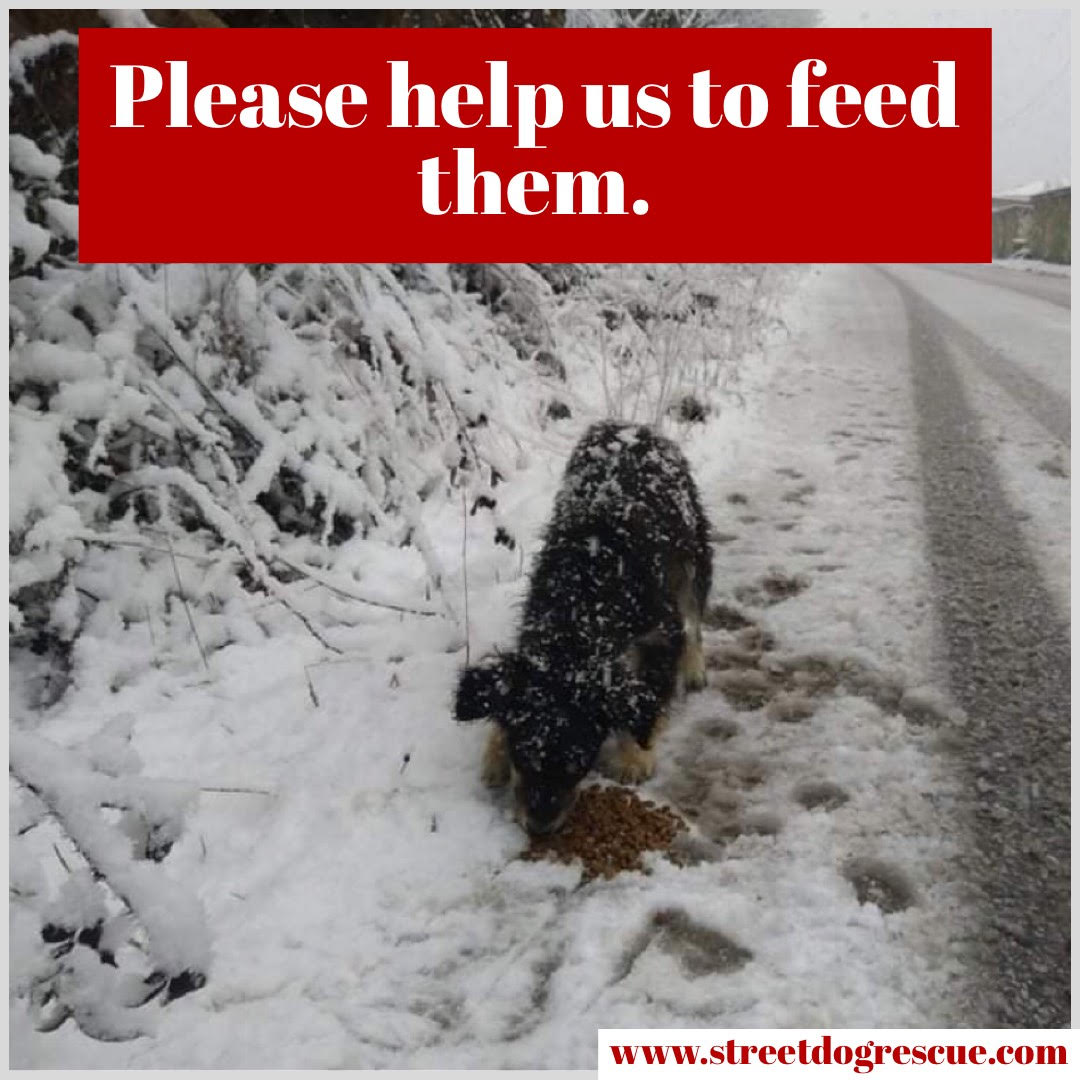 To donate please go to:

ITS BACK😁 EASTER THEMED PORTRAIT ARE OPTIONAL🐰🐣🥚🌻🌼